As a new year approaches, I reflect on everything I’ve accomplished in 2018. So far, the list includes:

So what are my resolutions for 2019? Well, the list is simple:

Finally, I will not beat myself up for not making dinner at home as much as I can. Because I know how much resolve I have when it comes to that.

— I listen to podcasts. I subscribe to How I Built This, Criminal, Terrible Thanks for Asking, and The Mortified Podcast among others.

The Terrible, Thanks for Asking podcast issued a writing challenge, and I texted my interest as requested. The first writing request came through on November 15 – so here goes…

Quick answer? Of course I’m totally up to my ass in alligators, so this post is two days late.  But here are a couple of the things I was thinking about on November 15, 2018…

So that’s where my head is at today, Thursday, November 15, 2018: grateful, annoyed, pensive and confident. At least I’m not terrible. Thanks for asking.

It’s been a year since I published a blog post. I have no good reason for my absence from the space.  Well, at least nothing good like…

Actually, the truth is

But more of the truth is, this past year, I

A recent episode (more heart than humor) in my life prompted me to write again. So, I’m back, bitches. And I’m glad to be back, defects and all.

Yes, I know dear readers (both of you!). It has been awhile since I last posted. In my defense, the universe recently conspired to make my life crazier than normal, with the trifecta of:

So it’s not any mystery that:

So, thanks for your patience readers. And know that if I go missing, it certainly isn’t from inaction.

Alex on the mound

One of my former co-workers has two blogs she updates regularly. I’m such a slacker, with only two blogs that I update when something crazy happens in my life, or if I bake a treat.

June 1st, she issued a 30-day writing challenge. Being the non-procrastinating type that I am, I jumped right on the challenge. On July 1.  But at that point, Rita was only on challenge number 26 herself — seems we both have a little procrastinator in us.

The theme for July 1 is LOVE. So here’s what the theme inspired me to write about…

ALL YOU NEED IS LOVE

I only thought about the past week using the words ‘baseball’, ‘vacation’, and ‘work’. But I was decidedly wrong about that. My week was about love.

First it was the love of baseball. My oldest son Alex’s baseball team has been fundraising and preparing for the ultimate experience with a week-long tournament in Myrtle Beach at The Ripken Experience. The majority of this team has been together for 2 years — most have been playing together for more than 4 years. To hear the boys tell it, they were “getting to go on vacation with all of their best friends”.

The boys did well in the tournament, with a record of 3-2 in pool play. They made it to the championship bracket, but lost in an early game to a taller, stronger, and year-round playing team from Georgia.  Disappointed at being out of the championship round early didn’t deter them from life’s joy. They spent the rest of the day at a water park, enjoying a different kind of pool play with one another.  And three of the nights we were there, the team and their families gathered for group meals. We even had a surprise birthday celebration for of one of the team moms.

How could you not help but love these kids and families who are a great bunch of people?

I ended up leaving Myrtle Beach before the championship round because I had a work conference I needed to attend in San Francisco. The Friday we were in San Francisco, our colleagues back home were participating in a community volunteer day.  A co-worker and I decided that we would participate on the west coast by volunteering to feed the homeless and hungry. The organization is Glide — a radically inclusive, just and loving community mobilized to alleviate suffering and break the cycles of poverty and marginalization. They feed 700 people for the afternoon meal. Volunteers help serve meals, take tickets, and clean tables.

Because Glide must have heard about my lack of prowess in the cooking department, I was in charge of handing out napkins and silverware:

Hairnet, apron, and gloves. I think I’ll use this as my entry in Playboy’s next “hottest moms” contest.

What I found humbling was that the individuals were so diverse. Some “looked” homeless. Some didn’t look homeless at all. Some talked to an imaginary friend as they went through the line. Some came through the  line multiple times, hanging their head in shame. Some brought their dogs and shared the meatloaf and rice with their best friend. One lady started a fight because she wanted to eat at a table by herself. The staff had to calm her down, and then they tried to make the volunteers feel better by saying it was no big deal. “You’re right,” I commented. “The Rice boys behave far worse than any of these folks.”

But almost every one of the people who walked through the door said “Thank you.”  Or “God bless.”  One guy even said “Hello, gorgeous.”  Hmmm…maybe I should send him my picture and enter his “hottest mom” contest.

What I felt after an exhausting and fast-paced two hours was a great deal of appreciation from both those served and the staff at Glide. It took no more than a smile, a hello, and handing someone a napkin with a fork or spoon to make them feel good.  How could I not love the feeling of warmth that my small kindness gave these people who have so little?

That weekend we were in San Francisco was also when the Gay Pride parade was going to take place. As I walked back from Macy’s on Sunday (having just had my own little love fest with the Michael Kors purse department), I walked past a guy with a t-shirt that very simply said Love is Love. And I saw these flags hanging outside the Hotel Nikko:

How awesome that a corporation uses the pride flag to let a group of individuals who have struggled for acceptance know that they are indeed loved?

So in the end, my week was not nearly as much about a vacation, a baseball tournament, or a work trip. It was about the love in my life, and why I should be more aware of it around me every day.

But that didn’t mean we had no sports going on last week. Because it was the start of football conditioning camp.

You might think in frustration I would have plucked out all the grey hairs on my head about having no down time between sports. But, 1) it would take me longer than a week to pull out all the grey hairs even after a Root Touch-Up, and 2) I didn’t have to be at football practice.   That’s because this year 1)  I’m employed, and 2) my husband is going to be a coach.

And that, dear readers, means from now until when school starts, I have Monday, Tuesday, Wednesday and Thursday night to myself from 6:00pm – 8:30pm (ish) as football conditioning camp and practices get underway.  Sweet Jesus, what’s a gal to do with all the down time?

My husband and boys have some definite ideas about what they think I should be doing with all my “free” time.

Husband & boys’ fantasy:  Think I should make a gourmet meal each night, and have it on the way to the table the second they get in the door.

Freakin’ reality: Look, ‘peel back foil to expose tater tots’ is as fancy as it gets around here for dinner.  And I hope by ‘table’ you mean the tray table in front of the ginormous TV in the family room so you can ignore me and watch ESPN ad-nauseum.

Freakin’ reality:  Look, we’re lucky that the loads of laundry I wash over and over because I forget about them, actually smell less moldy after the third wash. And if I do remember to move it from washer to dryer, it’s a Festivus miracle. So fold your own damn underwear.

Husband & boys’ fantasy: Think I should take the dog for a walk.

Freakin’ reality: Look, the damn dog can walk out onto the deck, down the steps and into the yard without my help. And if you want your tater tots on the tray table as your sweaty asses walk through the door, there will be no dog walking.

Husband & boys’ fantasy: Think I should find personal fulfillment and motherhood nirvana by cleaning the bathroom

Freakin’ reality: Look, try to aim better you bunch of firing range rejects.  And for the love of Charmin, put the effin’ seat down when you are done.

Look, here’s the reality of what I do while they are sweatin’ it out on the gridiron:

About a week ago, a bunch of funny blogging gals I follow conducted a blog hop. They all wrote about the same thing—what their blogs would have been about if they’d written them in their 20′s. They then linked to one another’s submissions. I will say that after reading the blogs, I may never think of leg warmers, Wham! or Doogie Howser, MD in the same way.

I was surprised I wasn’t asked to join in. But then I realized they probably wanted bloggers with a large following. Followers who aren’t inmates. Or relatives. And especially if that list isn’t mutually exclusive.

I was inspired (even if I wasn’t asked) to put together a synopsis of what my blog would have been about if I’d written it in my 20s. You’ll find links to read their really funny blogs at the end of my (lame ass) list.

So here’s what I would have been pontificating about in my 20s: 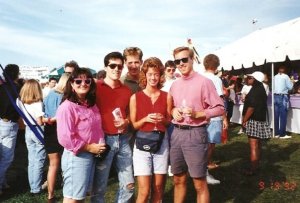 My sisters Susan and Nancy in raspberry taffeta bridesmaid dresses with matching garters. The picture taker (me) had the same outfit on. None of us should have EVER worn white shoes (wink, wink). On the alter, no less. 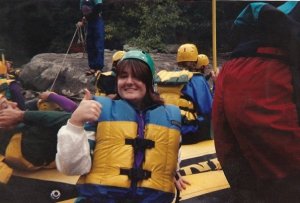 No perm, eyebrows waxed and ready for some rapids.

Hmmm. If cool content was important, maybe not being asked had nothing to do with my family’s RAP sheet after all.

Go ahead and jump on the blog jump:

Wait in the Van

One year ago today, I began my blog*. In that time, I have written 23,187 words in 55 blog posts (not counting this one). My longest post had 1,264 words describing a “day off” around the holidays, and my most succinct post had only 14 words in a surprising show of krispness and klarity.

My blog started off Times New Roman, but switched over to the less uptight and more she-isn’t-a-very-good-housekeeper-either stylings of verdana.

I’ve had 28 likes for my posts, and 124 comments on various posts on my blog. I’ve responded to comments with 51 comments of my own. If you count spam, the comments soar to a mind-numbing 425,486. Good thing I don’t pad my bra or my comment numbers, huh?

The subjects of my blog posts have varied, but usually fall into some fairly common areas:

So here’s to looking forward to another year of snarky commentary, general life observations and misadventures of the Rice family. Cheers!

* – my husband is deeply indebted to WordPress for giving me this outlet. Via this blog, fewer of my seemingly endless streams of commentary about e-v-e-r-y-t-h-i-n-g, my natterings on about celebrities who do nothing more than use up valuable oxygen, and my incoherent babblings about the misadventures of our kids have to fall upon his ears.

What I'm Blogging About

Did You Miss Any of These?

What is this twit tweeting about?

What I Read - cuz funny never gets old